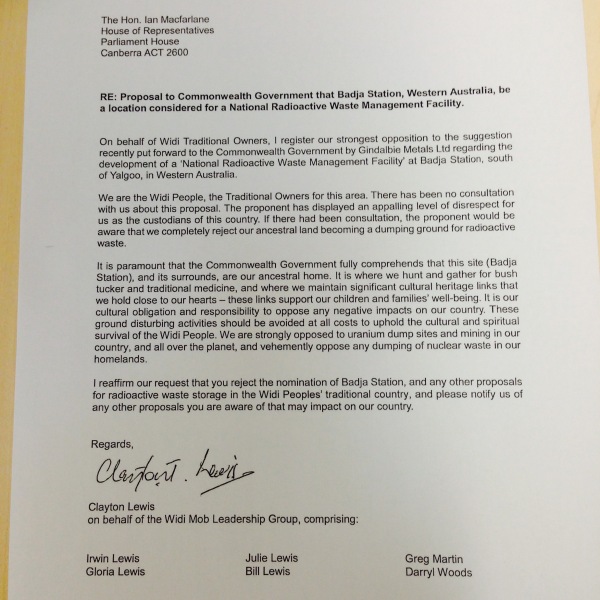 Today news broke that Gindalbie Metals Ltd has made a nomination to host the National Radioactive Waste dump at Badga Station in the Mid West of WA. The proposal by the troubled mining company was not discussed with the Widi Native Title claimant group, the public or the councillors of the Yalgoo Shire. This proposal has failed to meet expectations around community consultation and consent, with groups in the mid west already preparing to lodge their opposition to the project with Federal Minister Ian Macfarlane.

A letter from the Widi Mob leadership group has been sent to Federal Minister Ian Macfarlane – can download here: 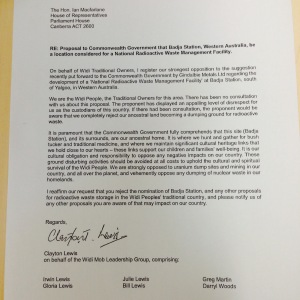 The Conservation Council of WA was alerted to the proposal by a concerned party and is calling on Federal Minister Ian Macfarlane to make all the National Waste nominations public. There has been one other confirmed nomination for a radioactive waste dump – at Kanpa near Warburton in WA’s east. The Kanpa proposal has received clear opposition from Ngaanyatjarra elders and the council has made comment that they do not support the proposal.

Another proposal has been made in Leonora, by a retired prospector. The local council has supported the nomination and sidelined local opposition. When the idea was first mentioned the Leonora community signed this letter and sent to Ian Macfarlane opposing a radioactive waste dump in WA. Widi Rejection Letter 130515 (2) 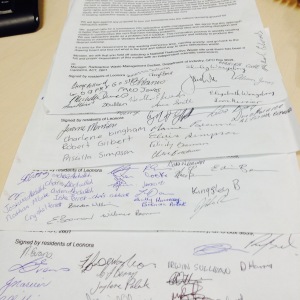 A short history of radioactive waste For 20 years successive Federal Governments have targeted remote Aboriginal communities to host a national radioactive waste facility. In 1998 the Federal Government announced plans to bury radioactive waste near Woomera in South Australia. After a long battle with South Australians and the SA Government, the Federal Government dropped the proposal in 2004. Following this decision the Federal Government then nominated three sites on Department of Defence land in the Northern Territory; Mt Everard, Harts Range and Fishers Ridge. In 2006 changes to legislation allowed additional site nominations from Aboriginal Land Councils in exchange for a financial compensation package. The Northern Land Council nominated a site on Muckaty Station in 2007, despite opposition from many Traditional Owners. The three Defence site nominations were withdrawn when the National Radioactive Waste Management Act passed in March 2012. This legislation contains many draconian provisions, including the ability to override any state or territory law that may hinder a national radioactive waste dump being constructed. In 2014 after a 7 year campaign by Traditional Owners from Muckaty supported by national environment groups and trade unions, the nomination for Muckaty Station was withdrawn. The decision not to rely on or progress the Muckaty nomination came mid-way through a federal court trial being run pro bono by Maurice Blackburn Social Justice Practice. The Federal Government has now preparing to launch a nationwide nomination process which opens up the nominations to land owners and local councils. What would go in the dump The national radioactive waste ‘facility’ would comprise an underground dump for low-level and short-lived intermediate-level radioactive waste, and an above-ground store for long-lived intermediate-level radioactive waste including spent nuclear fuel reprocessing waste. There is currently about 3700 cubic meters of radioactive waste which falls into these categories, approximately 278 truckloads. Currently, measured by volume, two sites hold well over 90% of the radioactive waste inventory: the Lucas Heights site south of Sydney, operated by the Australian Nuclear Science and Technology Organisation; and 2000 cubic metres of very-low-level radioactive waste stored on Defence Department land near Woomera, South Australia. Radioactive waste poses a risk to public health and the environment at waste storage sites and along transport routes. According to the Medical Association for the Prevention of War: There is no level of radioactive waste that is regarded as risk-free, hence the need for appropriate management. Even low-level exposure poses a small but finite risk of harm, especially the development of cancers. The 2005 report of the National Academy of Sciences in the US, BEIR (Biological Effects of Ionising Radiation) VII, stated “A comprehensive review of available biological and biophysical data supports a “linear-no-threshold” risk model – that the risk of cancer proceeds in a linear fashion at lower doses without a threshold and that the smallest dose has the potential to cause a small increase in risk to humans.” This risk is greater for children than for adults, and greater for females than for males. There are also risks of genetic damage to humans and other life forms. What to do with radioactive waste Peak national organisations, including the Australian Council of Trade Unions, Public Health Association of Australia and the Australian Conservation Foundation recommend the federal government initiate an independent national commission to examine all aspects of radioactive waste production, storage and management. Now is the time to take a considered, consultative and science based approach to identify the best solution for radioactive waste management in Australia. The Federal Government is preparing to open a national nomination process for a radioactive waste dump site in November. We will be closely monitoring any proposals for nominations in Western Australia to ensure the nature of the facility and possible impacts are fully understood by community members. Financial incentives offered, to date, have grossly underestimated the long term costs and risks to communities from hosting radioactive waste. The continued targeting of remote and indigenous communities to host these facilities in exchange for funding of basic services has consistently been based on politics rather than science and it is time for a new direction and approach. Centralised facilities are not the only option for management. Along with peak national organisations we are calling for a national commission into radioactive waste production and management that is independent and transparent and considers all options. Broad consultation is essential to progress the long-term management of radioactive materials.